Please visit my new blog at http://davidjhahn.blogspot.com/ and adjust any links accordingly. Thank you.

Or the right wing chicken littles and mindless minions of theirs would have you believe from this picture. 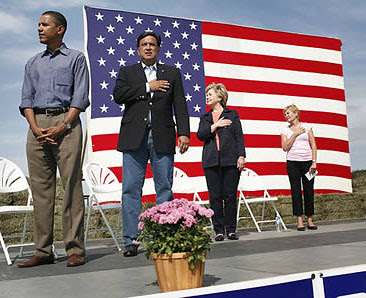 Ya know, I don't remember being taught in school that we are supposed to put our hands over our hearts during the playing of the national anthem. And if Obama, or anyone, doesn't do it during the playing of the anthem, I think it shows more conviction of character than it does any lack of patriotism. The hand over the heart is for the pledge of allegiance. When the national anthem is played, it is usually seen as disrespectful not to stand, I don't remember anything about having to put hands over hearts. I don't do it.

Writer Paul Tobin is bustin' out all over the place lately, this time with me (yay!) in Marvel Adventures Fantastic Four #33. Inked by Kris Justice, colored by Gullem Mari, and drawn by me. Special appearance by Firestar. 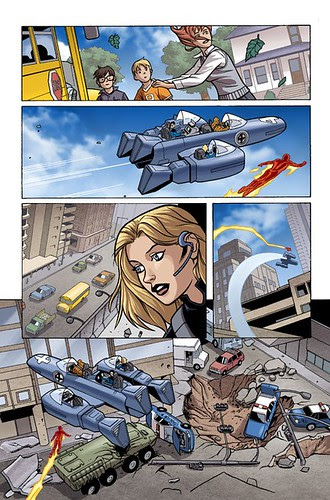 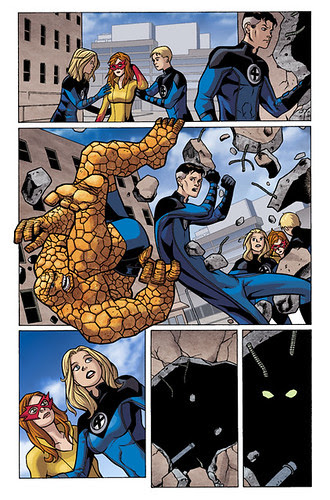 This one's for you, Steve Lieber.

Last week, I learned that a schoolmate of mine from high school just died from leukemia. He wasn't a friend of mine or anything, and the only memories I have of him are those of the typical antagonistic behaviors that jocks have towards, well, people like me. Though I was not a huge fan of this person, whom I'll refer to as 'Robert', he most certainly did not deserve death from cancer at age 41. I have learned just this evening that his younger brother has also just died (from what, I don't know yet). I can't imagine how horrible the family must feel right now. I tried to google both men to find out more about them and came across an online church newsletter. The newsletter was a year old, but in it was a list of 'prayer requests' and someone requested prayers for Robert to help him beat his cancer. Needless to say, it didn't work. Thanks a lot, God. One could say God wanted Robert near him, so He took him early. But now, with the loss of the second son just ten days later, it just makes you realize that God isn't a supreme being, but a supreme asshole.

Here's one of those silly e-mail questionaires that I bothered to answer. Oh well...

1. WERE YOU NAMED AFTER ANYONE? , Yes, I was named after Cotton Mather

2. WHEN WAS THE LAST TIME YOU CRIED?? Last December, during my nervous breakdown.

3. DO YOU LIKE YOUR HANDWRITING? It always looks good at the top of the page, but awful at the bottom, so, I'm 'eh' about it.

4. WHAT IS YOUR FAVORITE LUNCH?? Grilled Chicken with a wasabi/perilla
mint/Asian radish puree topping.? Trust me, it tastes pretty darned good

5. DO YOU HAVE KIDS?? What's with all the double question marks? Yes, one child.


6. IF YOU WERE ANOTHER PERSON WOULD YOU BE FRIENDS WITH YOU?? Yes. And I would totally do me too.

10. WHAT IS YOUR FAVORITE CEREAL?? Quaker LIFE.

12. DO YOU THINK YOU ARE STRONG?? This is a question a nine year old must've come up with. Stupid.


14. WHAT IS THE FIRST THING YOU NOTICE ABOUT PEOPLE??? Whether the person is male or female, then what they look like (is this someone who can harm me?), then whether they are an attractive person or an ugly one. All pretty basic survival instinct stuff.


16. WHAT IS THE LEAST FAVORITE THING ABOUT YOU?? My fat.


17. WHO DO YOU MISS THE MOST??? Dan Stapleton and Dr. Steve Mickelsen


18. DO YOU WANT EVERYONE TO SEND THIS BACK TO YOU?? To quote my friend Dan Stapleton: "Sure. It's always good to hear from friends, even if it under contrived circumstances such as a chain
letter."

19. WHAT COLOR PANTS AND SHOES ARE YOU WEARING?? Plaid pajama pants, black socks. And i'm on the bus right now.

20. WHAT WAS THE LAST THING YOU ATE? Half a grilled cheese and shrimp sandwich.

21. WHAT ARE YOU LISTENING TO RIGHT NOW?? Polyphonic Spree


22. IF YOU WHERE A CRAYON, WHAT COLOR WOULD YOU BE? The gold one that always fools kids into thinking that it will look cool if you color with it. It doesn't.


24. WHO WAS THE LAST PERSON YOU TALKED TO ON THE PHONE?? My wife, letting me know she was on her way home.

26. FAVORITE SPORTS TO WATCH?? Not a big fan of sports (see question #16), but if I had to pick, pro beach volleyball and ice hockey

27. HAIR COLOR?? Dark brown. How is this insightful to my friends?

32. LAST MOVIE YOU WATCHED? Smoking Aces, preceded by The Kingdom with Jamie Foxx

39. WHAT BOOK ARE YOU READING NOW? The Mighty Avengers, issue #5


41. WHAT DID YOU WATCH ON T. V. LAST NIGHT? Smoking Aces on DVD. And Ghost Hunters on satellite.

43. ROLLING STONES OR BEATLES? The Beatles

44. WHAT IS THE FARTHEST YOU HAVE BEEN FROM HOME?? I don't know the actual distance in miles, but I live in Oregon and went to Matsue, Shimane, Japan

45. DO YOU HAVE A SPECIAL TALENT?? I can draw people standing around or beating the shit out of each other and make a very comfortable living doing it.

47. WHOSE ANSWERS ARE YOU LOOKING FORWARD TO GETTING BACK?? My ass.

Actually, not too bad. Studio mates Paul Guinan and Jesse Hamm accompanied me to see this movie opening day Friday. We went in with low expectations for logic and reasonable expectations for action, and the movie delivered. Zombies looked good (but who's job was it at Umbrella Corp to dress the experimental super-zombies in matching jump suits?), slick, neat Vegas imagery. Characters in the movie who were taken right from the video game Resident Evil:Code Veronica X are Claire Redfield, Tyrant Zombie (genetic monster, actually) and Wesker. Too much needless digital erasing on Milla Jojovich's face in close ups. And, wow, bold move having the actor of Mid-Eastern heritage be the character who is the suicide bomber who runs a blockade in a truck packed with TNT. This movie was Mad Max Beyond Thunderdome with zombies.

So Much For Mary Jane

Okay, it has been far too long since my last update and I will try to stay on top of this blog thing. Let's see...I am no longer the artist on Spider-Man Loves Mary Jane, but have been moved up the food chain a bit, and now I will do at least two 4 issue arcs of Marvel Adventures Fantastic Four! Best yet, the first arc will be written by my friend Paul Tobin. Below is some Firestar pitch art for something Paul and I are tring to get off the ground. Also, below is a page from an 8 page story I am drawing and coloring for Spider-Man Family (written by Tom Beland). Check it out, Stegron! 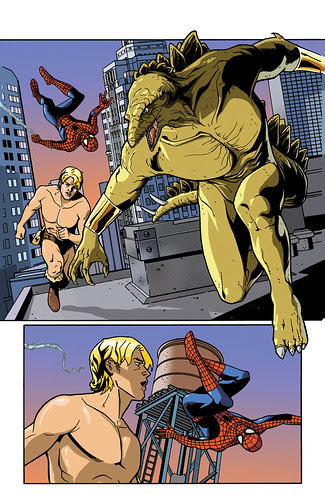 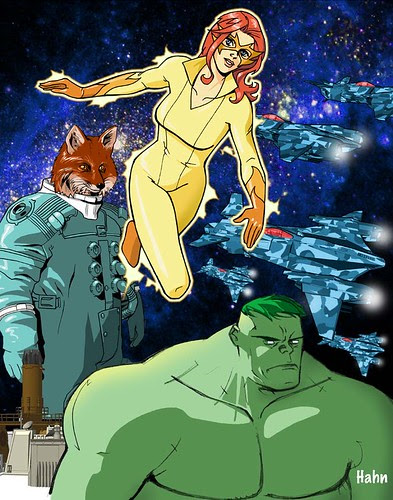 I draw and write comic books for a living, currently for DC Comics and Marvel Comics. I am married and have a baby girl named Cleo.